So we haven’t blogged in quite sometime. Today however, I have a story to share and by I … I mean me, Christy – AKA Mom. You see as I sit here watching RJ hum around the house getting ready for the American Finals Rodeo (AFR) and myself get ready to head to Winter Woolfest, it hit me how much has changed since the days of home school and RJ growing into the man he is now. Not all of it was great. Heck, not all of it was even good. Let’s face it, some of it was plain horrible. However, I have to say that he has turned out to be one hell of a grown man. I am sure you all know I am very proud of him and his journey from that sick little baby to who he is today. Not to mention all he has overcome being blind in one eye.

In the past years he has changed his direction in life several times. From Ice Skating to farming and now turning his attention more to the horses and “making a living with his rope”. For those whom have not followed us from the beginning RJ has always said “I going to make a living with my rope someday”. Even when we ran a full sized flock he never wavered. As times have changed in our lives we have down sized the flock. Oh, I still have sheep and goats but we have more cattle and horses as well. And let me tell you, we have put out some great horses into the roping world over the last two years. That means that it looks as if RJ is doing just what he said he would all those years ago. Back in Oct We were even honored with the title of CRRA Calf Roping Horse of the year. And Coop Was nominated and voted on by other cowboys and ropers who know a good horse when they see one work. RJ has even changed a few minds about Mustangs as he has been offered money for Star as she has started bringing in a paycheck as well. (No worries though she isn’t for sale) Not to mention all the others he is working with here on the farm.

So what does all this have to do with anything?? Well, Last night RJ attended the AFR Banquet where he was presented with a vest as well as his back number for this weekend. 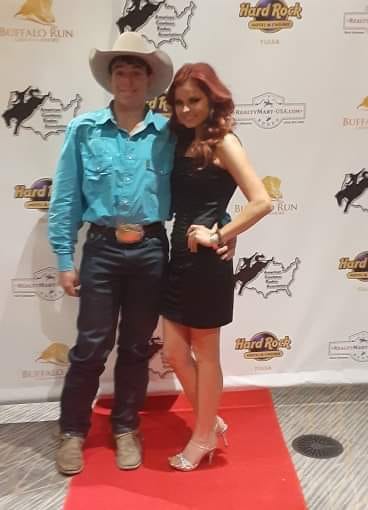 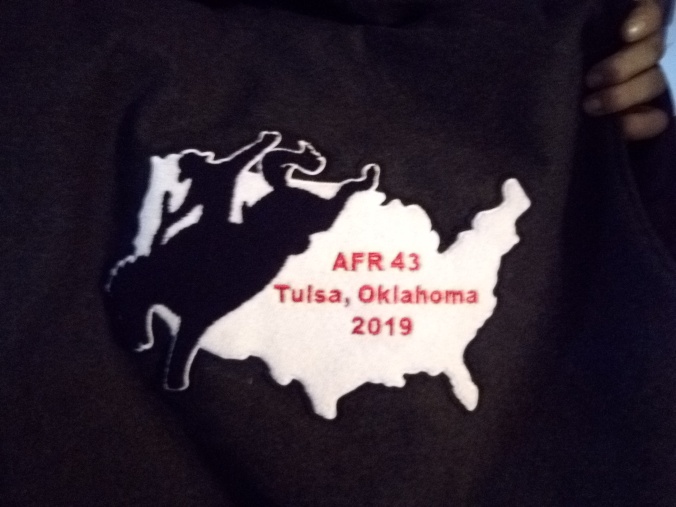 He was primed and ready. Today we spent time running around getting things all set for us both. I picked up the last few things I needed for Woolfest and he did the same. He purchased a new rope, checked all his equipment, packed and double checked everything. From saddle to tie down to reins and halters. Even feed and water buckets were made ready. Everything got a good going over. Then he went to work feeding for his Uncle. That is where the story begins. You see, While at work somehow he broke a spur.

Now some would say no big deal. Just pick up another pair and go. Well, the problem is that spurs have rowels on them. And Believe it or not those rowels are as custom to the cowboy that wears them, as they are the job he does with them and the horse they ride them on. So We hurried off to see if we could find a pair that would do the job. The only problem is that I have NEVER let him use big rowels. You see Rowels are a tool and if you do your job right you don’t need big rowels. You just need to know where and how to tickle a horse with them. RJ and I used to have huge fights about his rowel size as he always thought the bigger the rowel the cooler they looked. Until one day we were standing in line at a ranch store and an older gentleman that we didn’t know, looked at RJ and said “Son, you either wear those spurs for looks or you are a real cowboy.” RJ Beamed with all his 12 years of age chest pushed out and said “I am a real cowboy.” That man then explained to RJ that he too was a real cowboy and real cowboys didn’t need big flashy rowels like you see used today to get the job done. He said that real cowboys hardly ever had to use them and knew that they were just a training tool and when the horse was finished, if the cowboy had done his job right, You wouldn’t even need the spurs at all. Since then, RJ and I have never said one more word about rowels and he is picky about how big they can be when riding our horses. And most don’t even need them.

Well, all that said we had run out of time and we couldn’t find spurs that would work. RJ came home a bit upset. Coop is amazing but sometimes she still needs that little tickle of the spurs when leaving the box. The AFR is no place to not be prepared. Then something on the shelf, here in the kitchen, caught his eye. 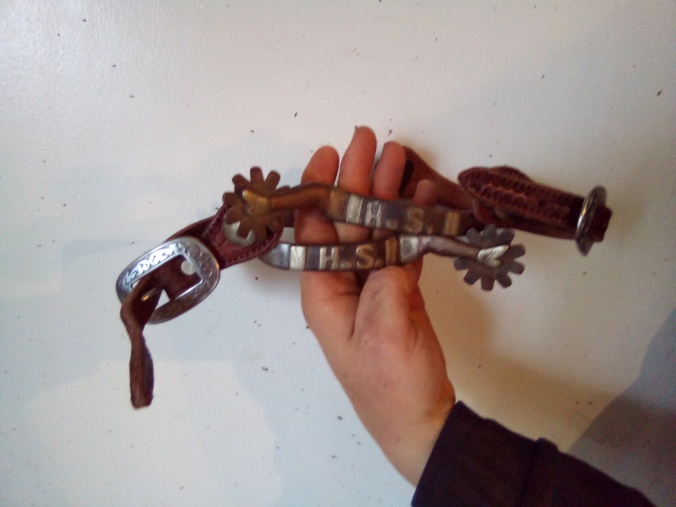 You see we have an Old pair of spurs on display. That means they sit around collecting dust. However, they have been handed down through the generations. They were first RJ’s great grandfather’s, then his grandfather’s, then his father’s and when his grandfather passed on he asked that they go to RJ. So now they are his. He has never used them as he didn’t want anything to happen to them. But as they caught his eye today he realized they have the same exact rowels on them as his spurs do.

So to bring this story to a close. RJ will be using those spurs this weekend at the AFR. With all of us praying and pulling for him and his Great Grandfather and Grandfather supporting him on his feet from Heaven and God touching and keeping him safe, I know he is going to do great. And for the record, no one that has worn the spurs before RJ have ever made it to the finals. I am sure they will be beaming with pride this weekend though No matter how it all turns out.